Kazakhstan is becoming an important destination for Bitcoin (BTC) miners seeking cheap electricity in the post-halving market driven by thinner margins. According to recent reports, the oil-rich Central Asian country expects the total amount of money invested in local crypto mining operations to double by the end of 2020 and attract $738 million over the next three years.

Unlike other countries in Central Asia, the Kazakh government has de facto legalized crypto mining, which makes the market more attractive for both local and foreign players. So, could this vast semidesert land become the new go-to spot for BTC miners?

From blanket crypto ban to legalization 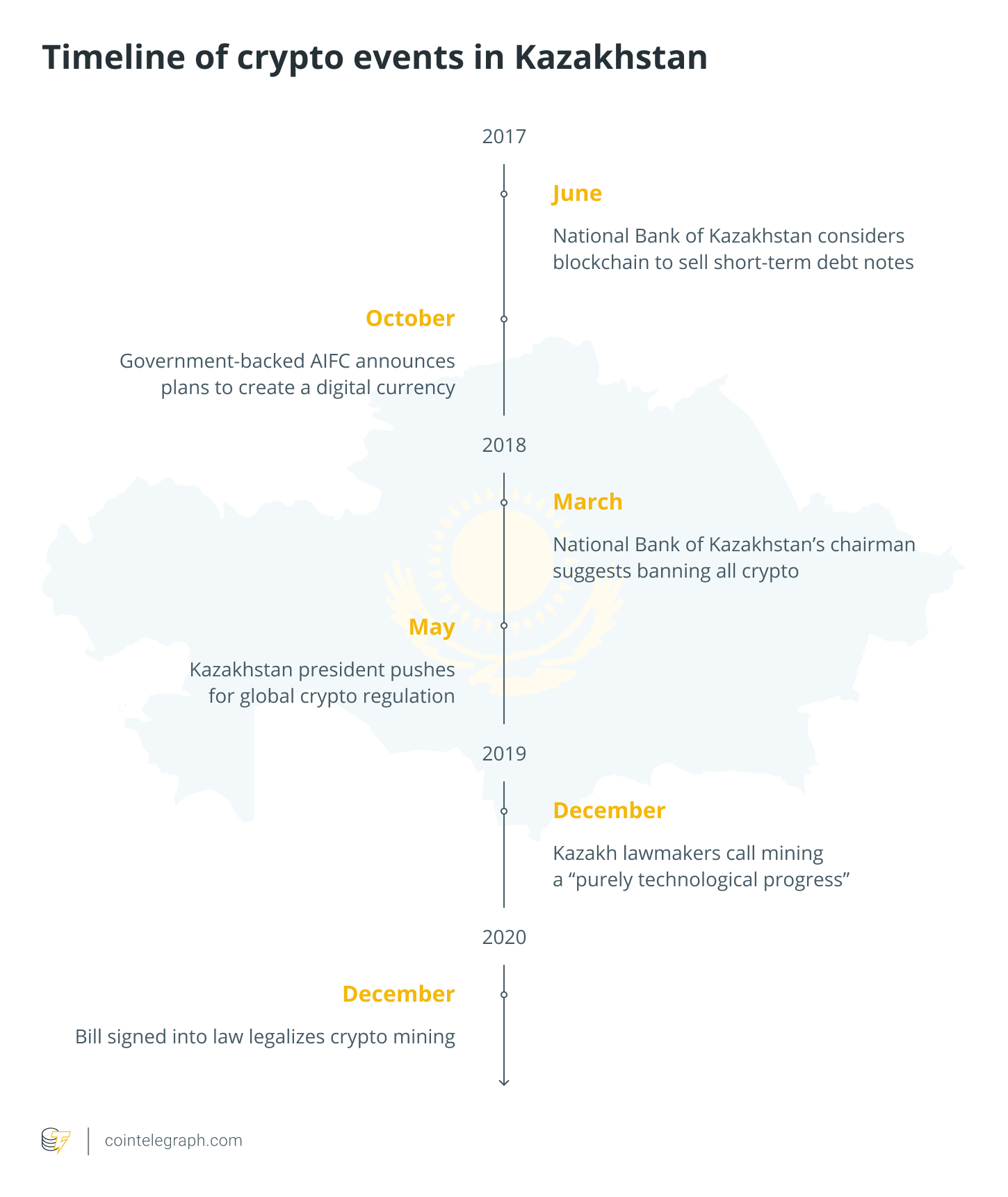 The Kazakh government has adopted an overall friendly approach to crypto recently, although there is still little regulatory clarity on the subject. However, positive developments were preceded by regulatory turbulence, and at some point, its central bank went as far as to suggest a blanket ban on cryptocurrencies.

In early 2018, the chairman of the National Bank of Kazakhstan, Daniyar Akishev, declared that his agency was considering outlawing all cryptocurrencies. Just a few months later, Kazakhstan’s president, Nursultan Nazarbayev, called for global cooperation in crypto regulation but did not mention whether this regulation should encourage the sector’s growth or its containment.

Things started to look more concrete and positive for local crypto miners in 2019. In December of last year, local media reported that Kazakhstan’s lawmakers wouldn’t be taxing cryptocurrency mining until the mined assets are exchanged for fiat money, as crypto mining would not be treated as an entrepreneurial activity but rather a “purely technological process.”

A recent bill, which was approved by the Kazakh Senate and signed into law by Nazarbayev earlier in June, essentially legalizes mining, saying that people involved in digital mining are obliged to inform the authorities about their activities. It also stresses that miners are the legal owners of the digital assets they produce.

Didar Bekbauov, founder of crypto mining marketplace Xive — a local company providing hosting services for large-scale international miners — and who previously worked at Hive Blockchain, told Cointelegraph that the current regulation is not strict, but stressed that the framework hasn’t been finalized yet: “The bill says miners need to report to [the] government about their activities. But nobody still knows how it will be in practice. Other than that no regulations.”


According to Bekbauov, the main mining players in Kazakhstan are foreign companies from China, Japan and “other Asian countries.” There is also Genesis Mining, an international cloud mining company with farms located across several countries, and Bitfury, another non-Chinese mining powerhouse headquartered in Amsterdam.

“They are miners with experience, some private funds, private investors,” Bekbauov said of the companies mining away in Kazakhstan. The Xive founder added that around 90% of their mining activities are performed on the Bitcoin blockchain, and he said that the arrival of foreign companies doesn’t make it harder for local mom-and-pop mining operations, as Kazakhstan “still has excess electricity generation.”

Therefore, the main attraction for miners is not the regulatory framework, which still remains ambiguous despite some positive developments, but rather the abnormally cheap electricity rates. As of December 2019, the price of electricity in Kazakhstan was $0.041 per kilowatt-hour for households and $0.049 for businesses. For comparison, the average electricity price in the United States is $0.14, although some states such as Texas seem to be offering competitive prices under certain conditions.

The price of electricity has always been one of the main factors when it comes to cryptocurrency mining, but it has become even more important after the Bitcoin halving took place back in May. The halved reward prompted miners to either sell their equipment or relocate to regions with cheaper electricity such as Kazakhstan, Russia, the Middle East and South America.

Along with the abundance of cheap electricity, Kazakhstan’s geographical position also makes it “a fast-growing hotbed for Bitcoin mining action,” according to Thomas Heller, global business director of F2Pool, who also told Cointelegraph:


“Kazakhstan is located in an optimal location for mining. The climate is cool, and is in close proximity to China. It’s becoming a popular location for Chinese miners to move old-gen machines from China to Kazakhstan to take advantage of cheaper electricity prices outside of the Sichuan Hydro Season.”
​
Bekbauov said that most local mining operations are located in regions with high electricity generation — such as Ekibastuz, Karagandy, Pavlodar and Taraz — while the country has an overall good climate for crypto mining throughout most of the year. Dmitrii Ushakov, chief commercial officer of BitRiver — a major co-location services provider for Bitcoin mining in the Commonwealth of Independent States region — confirmed that the cheap electricity prices in Kazakhstan are luring investors in, telling Cointelegraph: “Miners can currently find very attractive electricity prices for mining in Kazakhstan and some other former Soviet countries. This is the main reason for the current interest in mining in Kazakhstan.”

However, Ushakov added that there are “no natural prerequisites for cheap electricity in the country,” as it is mainly produced by coal-fired power plants. He elaborated, expanding on some other drawbacks of Kazakhstan-based mining, namely an overall unstable situation in the region and inadequate safety of local mining farms:


“This is risky because the markets and other factors affecting the price of such electricity within a nation can change quickly. Another aspect that should be considered here is the safety of these mining sites, which are often set up in a very short time by using pre-existing infrastructure that is old and unreliable.”
​
Will Kazakhstan become a top-three mining destination?


Last month, Kazakhstan’s minister of digital development, innovation and aerospace industry, Askar Zhumagaliyev, announced that the department is planning to attract 300 billion tenge, or $738 million, worth of investments by 2023 for activities related to cryptocurrency mining.

Kazakhstan’s ambitious mining plans might seem staggering at first, but the country has some statistics to back them up. According to Zhumagaliyev, there are currently 14 cryptocurrency mining farms that have already brought in approximately $201.7 million of investments combined.

Further, the Bitcoin Mining Map designed by the Cambridge Center for Alternative Finance at the Judge Business School of the University of Cambridge shows that the countries in the CIS region combined comprise the fourth largest region for crypto mining globally. In the second quarter of 2020, mining in Kazakhstan has reportedly made up about 6.17% of the average monthly Bitcoin hash rate, which is only slightly behind Russia (6.9%) and the United States (7.24%), while China remains the undisputed king (over 65%). Alejandro De La Torre, vice president of mining pool Poolin, agreed that under certain conditions, Kazakhstan could become third in the near future:


“With the abundance of cheap electrical prices, mild temperatures and the governments ’hands-off’ approach to mining, I do indeed foresee Kazakhstan becoming a top-3 crypto mining destination.”
​
Other experts are more skeptical. BitRiver’s Ushakov argued that although low electricity prices are a solid advantage for Kazakhstan in the mining race, the region itself isn’t stable enough to witness significant growth:


“Although low electricity prices make Kazakhstan a hot destination to mine, we believe that China, Russia and the USA will continue to be the top-3 mining destinations in the world because of increasing investments in mining, predictable energy policies and a more stable political as well as economic environment for mining.”
​
Kristy-Leigh Minehan, a mining consultant and former chief technology officer of Core Scientific, told Cointelegraph that she does not expect Kazakhstan to become a top-three destination anytime soon due to an apparent lack of interest from institutional players: “Bitcoin mining is becoming the destination of institutional investment that seeks an alternate asset base; many are still very shy with regards to Kazakhstan’s politics.”