[О КРИПТЕ НА АНГЛИЙСКОМ] Comparing Apple to Bitcoin? Crypto Occupies a Class of Its Own

A recent article by a Cointelegraph Markets contributor proclaimed that “Bitcoin is the ‘new’ Apple,” explaining just how Bitcoin’s (BTC) price could reach $60,000 by 2023: “Bitcoin hangs near the chasm of the adoption curve, and its price looks similar to Apple’s stock in 2008 before it broke out with a 520% rally.” 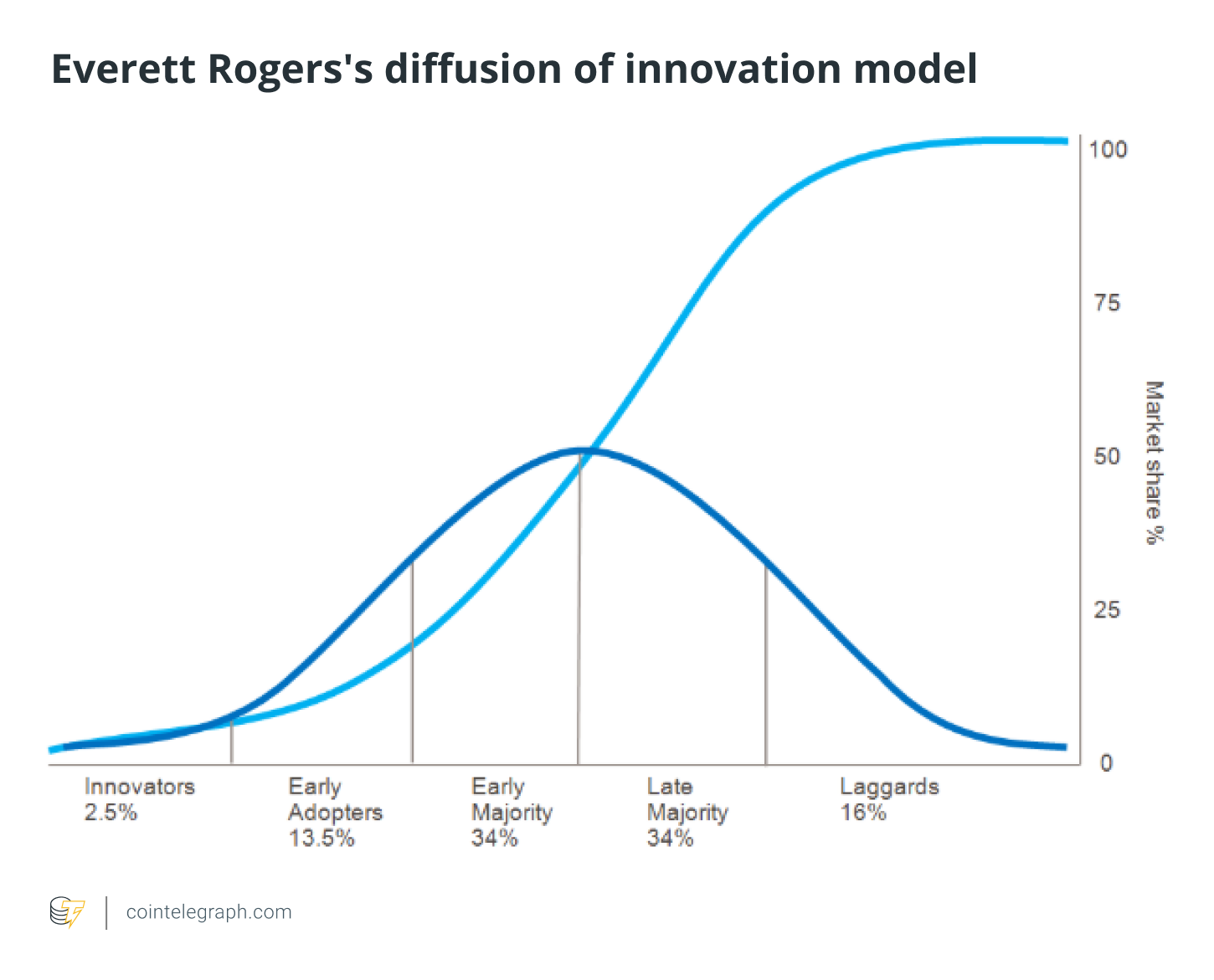 In 2008, manufacturer Apple’s United States smartphone penetration was stalled at about 11% and still waiting to cross the “chasm,” the gap between the “early adopter” stage and the “early majority” stages in the Rogers lexicon. Any technical innovation worth its salt needs to cross that threshold. Apple’s smartphone surmounted that chasm, of course: Usage exploded, and Apple’s share price soared into the ionosphere. Bitcoin may well be in a similar place today.

But this comparison, satisfying as it may be, raises some questions. Is BTC even a technology — like radios, PCs, and smartphones — or is it something different: unique, sui generis — i.e., in a class by itself? Is BTC’s global penetration really anywhere close to 11% — its putative U.S. penetration rate? Also, while smartphone usage indubitably crossed the chasm more than a decade ago, how does one extrapolate BTC’s future price from AAPL’s share price? Shouldn’t it be compared with smartphones’ price?

The resemblance between Bitcoin and Apple in terms of growth and adoption is indeed there, but in short, is it fair to compare Bitcoin to younger versions of tech giants like Apple?


Arvind Singhal, a professor of communication at the University of Texas at El Paso, whose academic research has focused on the diffusion of innovation, told Cointelegraph that Bitcoin did indeed seem singular: “It has tremendous barriers to adoption for most individuals and operates in a space of multiple familiar currencies — and that peculiarity would greatly influence its adoption.”

Michel Rauchs, the head of Paradigma — a consulting firm focusing on the digital assets sector — and a former research affiliate for the cryptocurrency and blockchain research program at the Cambridge Centre for Alternative Finance at the University of Cambridge, told Cointelegraph: “Bitcoin is not a technology in itself, and any comparison [with traditional technologies] is misguided.” He added: “It is a social/economic system,” a new monetary order that uses technology to represent its unit of accounts. “Technology is just a secondary component, a means to an end.”

Additionally, it may be important here to separate Bitcoin from the more generalized blockchain technology in which it partakes — or risk misapplying Rogers’s diffusion of innovation theory — suggested Theophanis Stratopoulos, PwC Chair Associate Professor at the University of Waterloo’s School of Accounting and Finance, who further explained to Cointelegraph:


“When decision-makers consider whether to implement blockchain — in, let’s say, their supply chain — they develop expectations in terms of the cost of making the investment — e.g., paying for the implementation of the software — versus the benefits, such as increased revenues or cost savings. It is the difference in expectations among decision-makers that explains the adoption cycle that was observed by Rogers.”
​
But Bitcoin does not behave the same way as other technologies typically adopted by firms — like CRM systems, for instance. “When it comes to Bitcoin, it’s the expected price that drives people to ‘invest’ in Bitcoin.” It is a matter of speculation, Stratopoulos continued, closer to a pyramid scheme than a capital expenditure. “If I believe that more people will want to hold Bitcoin in the future, the price of the Bitcoin will rise. In a case like this, it makes sense for me to ‘invest’ today rather than tomorrow.”


Oliver von Landsberg-Sadie, the CEO and founder of the BCB Group — a digital assets financial services group — agreed that BTC’s adoption cycle was anomalous, telling Cointelegraph: “The reason Bitcoin’s adoption path has broken formation with established adoption curves is quite technical: In the short term, the more users there are, the less useful it is as a currency.”

With more users, the Bitcoin network “self-regulates by raising the network fees as the mem pool bulges up in busy periods and breathes out in quieter ones.” But this makes Bitcoin less effective as a payments processing system. As von Landsberg-Sadie explained: “When fees are high, no one is going to pay a $5 transaction fee on a $5 coffee.”

Many technical solutions have been proposed to solve this dilemma, some in the form of forks, others like the Lightning Network project that makes use of a second layer, “but none have truly stuck in the core Bitcoin protocol, which has been the slowest to evolve.” The good news is that it is evolving, and the increase in off-chain transactions is reducing barriers, but all of this means one can’t expect Bitcoin to follow a classic Rogers technical adoption curve, according to von Landsberg-Sadie.

But Stratopoulos was unimpressed. “I would not compare Bitcoin to the performance of Apple or Amazon or any other high-tech company. Rogers’s adoption cycle applies to innovations — emerging technologies — not to the price of stock.” Kevin Dowd, a professor of finance and economics at Durham University in the United Kingdom, agreed, telling Cointelegraph:


“Since BTC is a form of product, then the natural comparison is with Apple’s smartphone product. Apple’s share price might have risen strongly, but the better comparison is with the price of smartphones, which have not.”
​
“It is relatively easy to find correlations” — like between AAPL in 2008 and BTC in 2020, commented Stratopoulos. “It does not mean that there is causation,” or it could be just a spurious correlation.

What stage is Bitcoin at?


What, then, can be said about Bitcoin adoption? If measured by awareness — e.g., recognition of the term Bitcoin — “then it has already entered the mainstream,” said Rauchs. A Blockchain Capital survey reported 89% awareness of Bitcoin in the U.S. as of Spring 2019. A U.K. Financial Conduct Authority survey conducted in December 2019, which was recently published, found that 73% have heard about crypto, compared to 58% in 2019.

As for BTC ownership, the Blockchain Capital survey reported: “In total, 9% of the [U.S] population owns Bitcoin — including 18% of those aged 18–34 and 12% of those aged 35–44.” The firm originally reported 11% but that was later corrected. In the U.K. survey, by comparison, an estimated “3.86% of the general population currently own cryptocurrencies.” This projects to approximately 1.9 million adults within the U.K. population (over 18) of roughly 50 million.

Rauchs finds the lower U.K. adoption estimate “more realistic” if generalizing; that is, he would peg crypto ownership at 3%–5% of the global population, which also includes indirect ownership — e.g., individuals participating in a pension fund that invests in Bitcoin. But this clearly means that all crypto is in the first half of the early adopter stage — nowhere near the so-called chasm.


Bitcoin clearly means different things to different people. “It’s most popular use today is as a store of value, while back in 2011, its principal use was as a payment method — for gaming” and other purposes, said Rauchs. Depending on its applications, different adoption curve scenarios are possible. For his part, Rauchs believes that BTC’s most likely future usage will be as an alternative, non-sovereign store of value.

According to von Landsberg-Sadie, Bitcoin’s true adoption pattern will be “more like a wave, oscillating higher at each cycle.” In this view, “the biggest bets are on the most extreme outcomes: Bitcoin will either ripple slowly out of relevance, or it will amplify meaningfully into the mainstream. My money is on the latter.”

In sum, BTC following the same growth pattern as Apple sounds like a fun version of what may happen, but ultimately, one shouldn’t quibble that it is “not based on a statistically valid experiment,” as Dowd reminded Cointelegraph. Still, according to several experts, it doesn’t make sense to compare Bitcoin to traditional technologies “because Bitcoin does not have the ability to create value — either in the form of increasing revenues or reducing costs,” as Stratopoulous noted. Moreover, global BTC penetration is arguably closer to 4% than to the 11% mark where smartphones stood in 2008, immediately before they went mainstream.